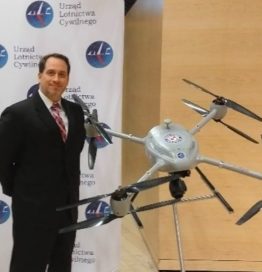 Ryan Steinbach is an Aviation Policy Coordinator in the DOT Secretary’s Office of Aviation Analysis. He represents the Secretary and senior DOT officials on matters of aviation policy, and works collaboratively with the FAA and other stakeholders for safe, economically sound operations in American airspace.

Prior to his time at the Department of Transportation, Ryan served as the Senior Technical Advisor to the Director of Flight Standards on Unmanned Aircraft Systems for the Federal Aviation Administration. As part of his role, he served on multiple rulemaking teams, the pilot qualifications Joint Authorities for Rulemaking on Unmanned Systems (JARUS) working group, and International Civil Aviation Organization (ICAO) Task Forces and Panels.

Ryan is a veteran of the Air Force and the Army, where he served as a public affairs officer for the B-2 Spirit (Stealth) Bomber, and as a Blackhawk crew chief.  He has also served in health communications and policy for the Department of Veterans Affairs as a Veterans Service Organization Liaison.

Ryan is currently a resident of Manassas, Virginia with his wife, Julie, and their six children ages 17 to 4.

Panel and Q&A – Access to the US UTM market: exemption and certification processes