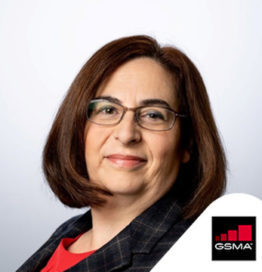 Barbara has been leading the GSMA Drone Interest Group for the last couple of years, to investigate and help the mobile industry to create a trusted solution for commercial unmanned aircraft. Since 2014, she has been the technical lead for the GSMA Internet of Things Programme, working on several aspects of IoT such as the development of the Mobile IoT Technologies (LTE-M, NB-IoT). Barbara has over 20 years of experience in the mobile industry. Before joining the GSMA, Barbara worked in R&D in several areas of telecommunications, including Intelligent Networks, IMS, Service Enabling and M2M/IoT. She also participates in, and actively contributed to, several standards.

The GSMA Internet of Things Programme help operators to fully realise the opportunity in the IoT. Operators must deliver secure IoT networks as well as scalable value added data services for the world’s industry and machines beyond connectivity. This is to be achieved by industry collaboration, appropriate regulation, optimising networks as well as developing key enablers to support the growth of IoT.

The GSMA IoT Program is the Event Partner of the Connected Skies Forum.