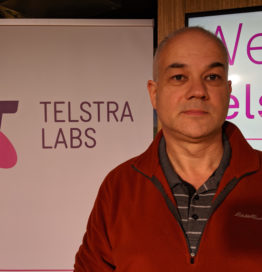 Peter has broad experience, working in many Telstra engineering disciplines for the last 28 years. For the last 2 of those he has been leading UAV research at Telstra Labs, prior to that he spent 10 years as the lead engineer designing and building the national professional broadcast video network, DVN2.

Peter is a member of the SMPTE (Society of Television and Motion Picture Engineers) and the SAE (Society of Automotive Engineers), and poses a rare mix of Television, Telecommunications and Automotive engineering skills. Recently Telstra has joined the Australian Association of Unmanned systems where Peter has presented on the role of the Telco in aviation. He has presented white papers at SMPTE conferences and participated is ACMA/ Comms Alliance Working Groups on broadcast interface standards. He has also worked with ASTRA (Australian Subscription Television and Radio Association) and the VSF (Video Services Forum). Peter has also participated on CASA’s UAS Standards sub committee and responded to a number of government enquires and regulator surveys into UAV policy development.

In his spare time Peter races a MK1 VW Golf which he designed and built to current CAMS Sport Sedan regulations. He also supports the annual Formula SAE university challenge. http://www.saea.com.au/formula-sae-a participating as a scrutineer and electrical safety officer.

Aviation and MNOs – the missing link?