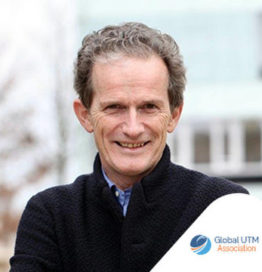 Simon Johnson is the acting Secretary General of the Global UTM Association.

Simon has been involved in the drone industry for the past ten years, during which time he has gained unique experience and built a strong network. He has mentored pioneers like senseFly, Flyabililty, Pix4D, Involi and organized topical conferences such as DroneApps (2015), European UTM Day (2016) and recently the Aviation Digital Transformation Forum. Simon has been a private pilot for over 30 years and, last but not least, a founding father of GUTMA.
Simon has a degree in Computer Science with Electronic Engineering from University College London, sold GSM test equipment for Hewlett-Packard and his first start-up developed, in the early 1990s, GPS-based navigation and tracking solutions for pilots, sailors and fleet managers. He has the perfect skills and profile to represent GUTMA worldwide and to implement the next steps of the association’s rapid progression.

Simon is the organizer of GUTMA Connected Skies – Barcelona.