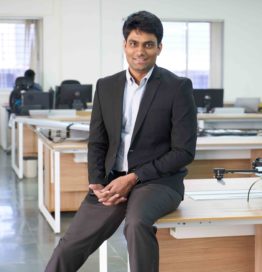 Ankit graduated from IIT Bombay with a Dual Degree in Mechanical Engineering in 2005.

Ankit with his team has led ideaForge to become a global technology leader in VTOL Micro and Mini UAV space and is clear the market leader in India. ideaForge’s UAVs have been utilized for saving the lives of service personnel and civilians in several anti-terror & counter-insurgency operations, disaster response, and security & surveillance missions. Today, its drones also serve the rural citizens of India by mapping Indian villages under the SWAMITVA Scheme.

Apart from being listed as one of the top 35 entrepreneurs under the age of 35 in India by the Entrepreneur Magazine in 2017, he was also recognized as the Young Achiever of the Year by the Ascent Foundation in 2017. ideaForge has been awarded the Best Product Design Company in A&D at the Deftronics Awards in 2017 by IESA and also received the Marico Innovation Foundation’s award for Business Innovation in 2018. Ankit and his Co-founders are also the recipients of the Young Alumni Achiever Award by IIT Bombay in 2020.

As a member of the Drones Task Force, BVLOS BEAM Committee & the UTM  Committee of India, Ankit is playing a prominent role in defining & standardizing UAV regulations in India and providing neutral policy suggestions to positively impact the entire industry. He is also the Co-Chair, FICCI Committee on Drones.