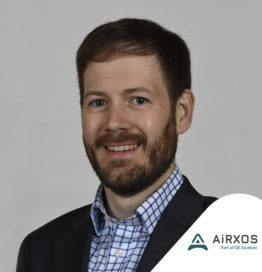 Ted Lester is the Chief UTM Architect at AiRXOS, part of GE Aviation.

Ted directs the UTM technology roadmap and manages external UTM-related partnerships. He also engages with standards committees, including serving as the co-chair of the RTCA Special Committee 228 Detect and Avoid working group.

Prior to joining AiRXOS, Ted was a Group Leader and Lead Systems Engineer at The MITRE Corporation in Bedford, Massachusetts, where he led projects related to UAS airspace integration and safety for the US Air Force and FAA, while also leading the UAS ExCom Science and Research Panel (SARP). Ted has also worked as a general aviation avionics product manager and systems engineer at Avidyne Corporation.

He holds a B.A. from Middlebury College majoring in physics and an S.M. from MIT in Aeronautics and Astronautics. Ted is an avid cyclist, skier, FAA Certified Flight Instructor – Instrument and Part 107 pilot, and part owner of two Cessna airplanes.

AiRXOS is a Gold Sponsor of Connected Skies, and member of the Global UTM Association.

MNOs and Aviation on Stage – Ask the Experts

5:00 pm - 5:30 pm
Q&A
View full schedule
PREV NEXT
We use cookies to ensure that we give you the best experience on our website. If you continue to use this site we will assume that you are happy with it.Ok